Found matted on deaths door in an overcrowded kennel.

On a trip to Riverside Shelter we found sweet Olivia getting trampled in an over crowded kennel.  Olivia was skin and bones, hiding in the corner of the kennel completely shut down. We took one look at Olivia and we decided right then and there to take her with us.  During Olivia’s first 24 hours in the rescue, it became increasingly obvious that she was a very sick dog.

As her health continued to decline, day 3 began with Olivia’s first trip to the emergency room. Memorial Day, 2011 at 6:30 am, is where we began the long journey to diagnosing her illness.  Olivia was poked and prodded for days on end and her foster family feared they were simply providing hospice care to make her comfortable until she passed.  She was painfully thin, refusing to eat and rarely leaving her bed until the day her doctors finally found the answer we were looking for.  Olivia was suffering from liver failure likely resulting from eating something toxic during her life of living on the streets.  Now that we had an answer and a regiment of medication and a proper diet, we could start down the road to help Olivia recover.  The road to recovery was not without some sizeable bumps.  At only a year old, Olivia still had the personality of a puppy and as she began to feel better, she began to show us her mischievous side.  She chewed and swallowed parts of her toys, ate twigs in the yard and finally chewed through an electric cord all the while educating us as to the importance of Olivia-proofing any home she would ultimately live in. 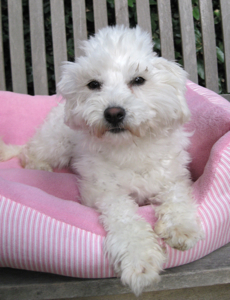 Family after family applied to adopt Olivia and each time the adoption coordinators at Lovebugs carefully explained her condition to every family telling them that she would likely need a special diet and a watchful family for the rest of her life.  One by one, the families decided not to adopt Olivia until one day… an application came in from the Maggay family.  The adoption coordinators called this family just like all the others expecting another disappointing outcome but to our surprise this family was open to meeting our little Lovebug even with her health concerns.  We primped and polished Olivia in hopes that she would make her best impression and off we went to our adoption appointment.  Of course Chris and Mary Maggay thought Olivia was adorable and loved her delightful personality but we still did not know if having a dog with special needs was what they had in mind.  Little did we know, Olivia was actually directing this adoption appointment and SHE was choosing her new family right before our eyes.  On August 20, 2011, Olivia began her new life as a pampered furry member of the family she was always meant to be part of.